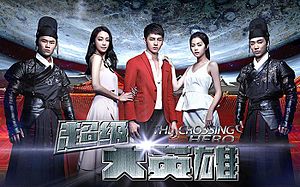 A night out clubbing brought Hóng Xiǎo Dōng, Zuǒ Yòu Shǒu and Katherine together, further entwining them in the affairs of the mysterious group of men dressed in black. Meanwhile, at the base, Mò Hán and Zhāng Xiǎntíng get the Imperial Guards drunk in a bid to ‘modernize’ them.

This episode starts with poor Xiào Tiān getting a terrible fright seeing his comrade’s hair being cut. Who is still drunk. Until he sees his hair, or, rather, the lack thereof. Xiào Tiān is completely against the idea of having his own hair cut until it’s suggested that ladies might like him if he did. Unfortunately, the roles that he and Péng Zé play this episode amount to little more than that.

Towards the end we get to see Péng Zé in action again, saving the day. Then the two get lost which wasn’t included in the episode, unfortunately! It’s a shame. I’ve said so from the beginning – they’re just lovely, brightening the screen every time they make an appearance. It would have been funny to see them try to navigate the city, but alas!

Mò Hán tries to go along with Hóng Xiǎo Dōng this episode and is unsurprisingly shot down in flames. The reason why? Women aren’t allowed to do field work. I am pissed for her. Poor Mò Hán is left to her heartbreak as she watches them go off on the same motorbike and work together day in and day out. Her answer is to get on her knees and beg the Imperial Guards to be taken on as a disciple in martial arts so that she can help Hóng Xiǎo Dōng.

It doesn’t go anywhere in this episode but I hope that there is going to be progress on this front. I adore these three together. They’re fun, they get on well – it would make for great viewing and it would improve her role. I think she’s sweet but there are only so many ways you can cheer someone on from the sidelines. I’d love to see her come into her own.

This episode is, again, focused on Zhāng Xiǎntíng and Hóng Xiǎo Dōng. Still determined to get the scoop on the Imperial Guards, she and Hóng Xiǎo Dōng make a bet. If she wins, she can interview the Imperial Guards. He, of course, makes it so that she has to dress as a maid and serve his every whim if he wins whilst working for free at his agency. Not a fair exchange. I’d almost admire her determination for taking him up on it – I’m definitely proud that she got him to sign his agreement – if this weren’t such blatant fan service. It could be forgiven if this series treated its female characters better.

I’m not entirely sure about her character anymore. I was on board for her determination but this episode’s undercover work is cringeworthy. She’s not cut out to be an investigative journalist. Even so, I’m really pissed about her going into that shipping container. She had an opportunity to kick someone’s butt and they took it from her! It would have taken a punch! But they had her play the damsel in distress to be rescued instead.

Hóng Xiǎo Dōng is as he always has been. He continues to talk down to both ladies, not letting Mò Hán join him for field work because of his self-made sexist policy. Also, his comment that Zhāng Xiǎntíng is an exception because ‘she’s a man… manly’ really rubs me the wrong way. I wouldn’t expect this kind of topic from an idol drama – this one especially – but Zhāng Xiǎntíng has given no indication of being anything but a woman.

However, there is some character development here. We get to see him and Zhāng Xiǎntíng getting along. I can definitely see a fondness for each other in them. It’s nice. In terms of story development we discover that Zhāng Xiǎntíng’s ringtone turns him into Hóng Xīdōng for small amounts of time.

Though he doesn’t have much screentime, seeing Hóng Xīdōng is lovely. He’s fantastically powerful and his adoration of Zhāng Xiǎntíng, whom he believes is his wife, is so sweet.

In the end, both Zhāng Xiǎntíng and Hóng Xiǎo Dōng are taken into police custody. It’s nice to see that their relationship is progressing. This brings in a brief appearance by Zhū Kě Shàng, who’s still having no luck. Not least because, for all it’s worth, it’s not worth much. The police could have showed up without him appearing at all and nothing would change. It’s a shame. I like him. He has the potential for more. And with him in the little to no screentime club is Zuǒ Yòu Shǒu who also could have been cut out of the episode all together.

This episode was an improvement on the last. However, I have to seriously question the scriptwriters’ credibility. Pretending to be a female masseuse, Hóng Xiǎo Dōng talks to the mistress of his target. Putting aside the misogynistic shit he spews and the caricature that is the mistress, this is a joke. I don’t know what women he’s encountered before. You really wouldn’t speak like that to a man. That man in particular. And you wouldn’t fall for his ‘masseuse’ act either. You can’t just run your hands over someone’s back and call it a massage. Even a novice would question his ability, never mind someone accustomed to that lifestyle – a.k.a., the mistress whose back he was rubbing.

The great escape, which had promise, was really compromised by a lack of thinking things through. Even if you disarm an enemy you don’t leave the weapon. Your opponent will get back up andpick it back up. Or a comrade will pick it up. There is only one reason why these two are not dead and it’s called deus ex machina. You should never, never, never have to rely on using a deus ex machina. If you do, go back and start again.

Guns are long range weapons. Any men-dressed-in-black organizations would know that. Or else they’d be dead. Like our two protagonists are meant to be. Two of them approaching Hóng Xiǎo Dōng was suicidal foolishness. That they just fired blindly when Hóng Xiǎo Dōng and Zhāng Xiǎntíng were just standing there was pure farce. You aim weapons like that. They didn’t know you were there! Aim for the legs! If you don’t want them dead. Aim for the chest if you do! You can’t expect the audience to believe that a man like the director would hire amateurs to do his dirty work.

Speaking of the director, the ease with which Zhāng Xiǎntíng and Hóng Xiǎo Dōng ‘infiltrate’ the club is laughable. Their cover should have been blown before it had a chance to begin. And where are the other employees? He’s the club’s owner and she’s his mistress. The actual employees aren’t going to give up the opportunity to curry favour with people who are as important as that. Did any of the script writer’s put even the slightest thought to this series? And you can’t have the director question whether or not Hóng Xiǎo Dōng is an actual employee if he isn’t going to question whether Zhāng Xiǎntíng is or not. Either he knows his employees or he doesn’t. Considering the presumed illegality of his work – you don’t need men in black if what you’re doing is legal – I’d assume that he would. In case of people attempting to infiltrate his dealings.

However, that’s not to say that the episode was hopeless or terrible. Aside from the deus ex machina and the mishandled action scenes it was fun to watch. It felt a little drawn out at times and it’s treatment of its females could be better but the episode is an improvement and there’s still promise in the series.